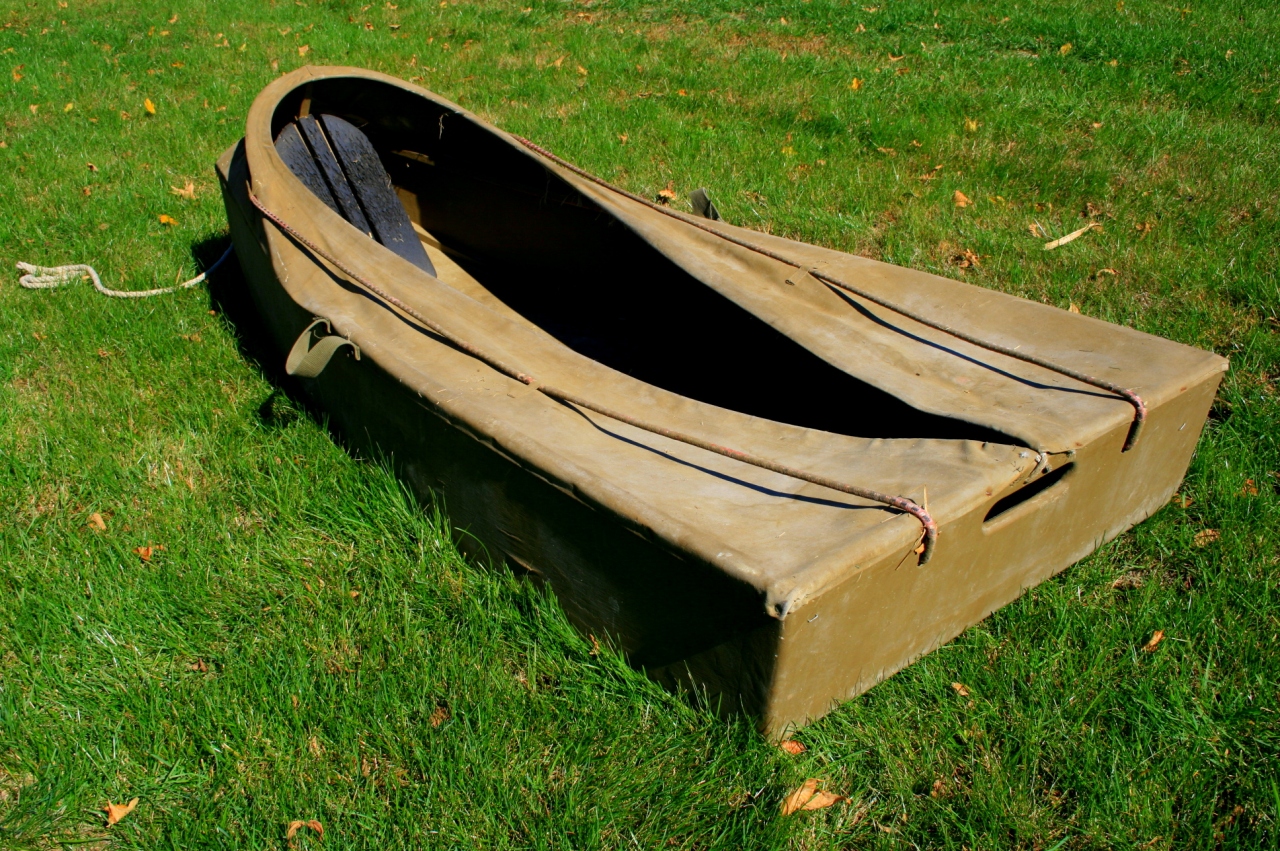 The back story.  How I designed, built and used my first “gunning coffins”.

I built my first coffin box in 1981 and drew up the plans at that time.  I wrote up the building instructions a couple of years later and they were published in the newsletter of the South Shore Waterfowlers Association (SSWA) – “the voice of the Long Island waterfowler”.

The name for this vessel – or is it a blind?-  has always been a bit challenging.  When a good friend and gunning partner first saw me lying in my first one – in the parking lot at the SSWA Duckboat Show – he could not decide whether he was seeing Jesus of Nazareth in his manger or Baby Moses in his reed basket.  I originally called it a “coffin box”, as you can see on the plans themselves, but newsletter editor Tim Chelius used “Gunning Box” in the newsletter – no doubt to protect the delicate sensibilities of his duck hunting readership.

Since that time, the plans have been revised (~1991) and re-printed in the same newsletter and years later posted on the internet.  I have been very glad to see gunners from all around the country building these boxes – or some variant thereof.  I am posting the plans and instructions here to encourage further use and sharing and variation.  I have just built another pair this spring (2013) and have photo-documented each step in the process.  The building instructions are presented – in the How I Do It portion of this site – both as a straight Narrative – albeit much more detailed than the original two-thirds of a page – and also as a Gallery/Slide Show.  Although I am still pretty much an “original recipe” devotee, I encourage anyone to adapt the idea however best meets his or her needs.

Here is the “back story” as I present it currently in the building instructions.  It tells how I originally conceived of this project and how I used the first ones I built.  The actual “Building” parts are in the How I Do It section, under Sanford Gunning Box.

These instructions are updated from the original plans and instructions.  The plans were drawn in 1981 and were published along with building instructions in the July-August 1984 newsletter of the South Shore Waterfowlers Association, of Long Island, NY.  I have revised these instructions based on experience – I’ve built or overseen the building of a dozen or so of these boxes – and on the availability of better materials.

Gunning coffins, or meadow boxes, or whatever you want to call them, have been around since the 19th century.  I did not know this, however, when I hit upon the idea during a howling gale in probably 1967 or 68 – when I was 14 or 15.  It must have truly been “a dark and stormy night” because there was precious little light as dawn came to Captree Island and the wind was roaring out of the southwest. I remember having to keep my head tipped down whenever I faced upwind, to keep from stinging my eyes.  I do not remember all the details of the hunt; I do remember that my Dad and I were hunting along with Dick Simmons and his sons.  I was with eldest son Richie at first light when we jumped a Snowy Owl within about 10 yards.  Like most living things, the Owl had been hunkered down out of the gale.  I also remember that there were Black Ducks everywhere and we certainly did not go home later empty-handed.  What I most recall, though, is trudging upwind.  I had no waders then, just hip boots, and so there was a lot of jumping of mosquito ditches and skirting the many potholes and larger ponds.  Blacks were jumping from every little spot, usually surprising me, and almost always just beyond range.  I do not recall if I even took a shot at these birds.  But, I do recall thinking:  If only there were a way to get down out of the wind and hide next to one of these potholes.

Of course, chasing ducks and geese on Great South Bay, we had the requisite grassboats and scooters.  We generally hunted ducks over decoys and all learned to shoot by first lying on our backs and then sitting up when the birds presented the desired opportunity. So, what was needed for the interior of an island like Captree was something light that could be dragged out and then keep you dry and well-hidden when you lay down to shoot.  A low profile was needed on the salt meadows.  The salt hay seldom grows taller than your kneecaps during its growing season and usually lays down flat by the time the gunning season comes around.  A Black Duck in a saltmarsh pothole can see danger coming from a long way.

I am guessing that I discussed my ideas with my Dad later that morning, perhaps on the drive home to East Islip, or perhaps over breakfast.  My dad was always designing things right at the kitchen counter (which, of course, he had designed and built.)  Most often he was drawing renovations to the house or custom woodwork for a customer but, not uncommonly, it was some sort of watercraft.  Ted Sanford was not one to go out and buy what he needed – unless it was materials to build something he had first designed.  Maybe this is part of being a duck hunter.  In any event, I inherited or absorbed the same trait and can remember putting my first ideas on paper in my Junior High study halls.  I drew something small, just big enough to contain me, and without rigid wooden decks.  We had already added a canvas “cowling” to our Great South Bay Scooter – to hide our head silhouette and to keep the winds out of the cockpit.  I used this same approach for the coffin.  I wanted no “moving parts” but wanted to be able to get in and out of the box unhindered.  Of course, thatching it with salt hay was never a question: the box and its inhabitant must be invisible to the birds.  So, the “decks” would be made of fabric and would need to hold the grass.  The other idea – an approach that separates this box from most other gunning coffins I have seen – is that it is built like a boat and not like a box; it is built like a hull and not like a cabinet – nor like a real coffin, for that matter.  As a result, the bottom rockers up toward the bow and so it drags and tows easily.  It is also fairly stiff and lightweight.  And, like any boat, it is watertight.

I did not actually build my first gunning coffin until 1981.  I was working for New York State Department of Environmental Conservation in Stony Brook.  As a young Wildlife Biologist, I had almost no money and my Dad still had all of our boats upstate, on Seneca Lake.  I had a gun and decoys but only chest waders – no boat of any kind.  I firmed up the design – making certain I could get it out of a single sheet of plywood.  I laminated the headpiece out of clear red oak and Weldwood Glue.  I sewed the cover out of heavy burlap and fastened it to the sides with thumbtacks – which I peened over inside.  I taped the seams and ‘glassed just the bottom.  I built it just long enough so that the soles of my boots would rest at a comfortable angle on the stern transom. As it happened, this size just fit inside my VW Rabbit, with the passenger seat folded forward.

I shot a bunch of birds out of this coffin.  Most were Black Ducks – including my first double on that species – but I’ll never forget my first drake Pintail, too.  I entered the coffin in the 1983 Duckboat Show run by the South Shore Waterfowlers and took a blue ribbon.  In fact, they created a Gunning Coffin category thereafter.  Ultimately, I donated Hull # 1 to the Waterfowlers as a raffle prize.  I built a couple more for myself and helped friends build maybe another 10 or so.  I know that many others have been made from my plans.  The New Jersey Waterfowlers and later the South Shore Waterfowlers have published one version or another of these plans, first in paper then later on the web.  I have seen them around Long Island and at the Tuckerton Show.  Thanks to the web, I just recently saw a post about a guy in Washington State ‘glassing his “Sanford-style Gunning Box”.

Of the newer pair I built for myself, I had to abandon one during a storm.  NJ Waterfowl Biologist Paul Castelli and I were hunting Thatch Island in one of the strongest winds I have ever hunted – at least from a boat.  The northwest winds were certainly well into the realm of a full gale.  I remember taking a nice drake Gadwall.  We had motored out with my 2-man sneakbox, towing 2 coffins.  They tow well with a long (~40’) towrope to keep them behind the wake and some stool in them to give them some ballast.  We ran into trouble on the return trip.  The tide had gone off and the motor was tipped up into shallow drive, churning the sandy bottom and making precious little headway.  We labored our way up into the lee of Gilgo Island, but just barely.  The second coffin – which I had built full-length to accommodate my taller gunning partners – kept capsizing whenever it caught a crosswind.  We still had to get across Reynolds Channel to get back to the trailer.  So, we made Gilgo and I hauled the longer coffin onto terra firma.  I tied its painter to the base of a hightide bush, flipped it over, and hoped it would be there when I could get back several days later.  Well, Paul and I surfed into a memorable (!) landfall at the launch site – the wind was directly astern with a ferocious following sea.  I never found the stashed coffin.  I hope it is still being used to fool unsuspecting fowl somewhere in Great South Bay.  The coffin I did tow home  – Hull #2 – is still in use.  For a number of years, I “thatched” it with cornstalks for ducks and geese hereabouts.  It is now back on Long Island, in the capable hands of Ryan Chelius, who shot his first duck – a nice big Black Duck – from it in 2011.

I hope these plans continue to be used by many, far and wide.  Please let me know if you build one.     – SJS

As mentioned above, one of my coffins is now used by Ryan Chelius – son of Tim Chelius – on Long Island.  I brought it down to Tim and Ryan in 2011 so Tim could tow it behind his Sneakbox. Ryan wrote the tale of his first hunt – resulting in his first Black Duck – and had his story published in New York Outdoor News (albeit adding a T to my surname….) as Black duck Friday in the July 13, 2012 issue.

One of these coffins is also featured in a work of fine art.  Adriano Manocchia – who by sheer coincidence lives just a few miles from me now – painted a beautiful picture – Bay Brandt – after a day on the bay with Craig Kessler and Fred Wertz.  In the oil painting is a gunner – cannot really tell if it is Craig or Fred, what with the heavy gunning coats – dragging a “meadow box” (as Fred calls them) that Fred built in my basement shop in East Patchogue (at the time).

This is just a detail from the painting – see the full composition at adriano-art.com. 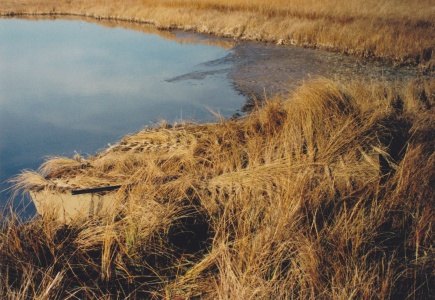 Here is a pair of boxes dragged into a salt pond.